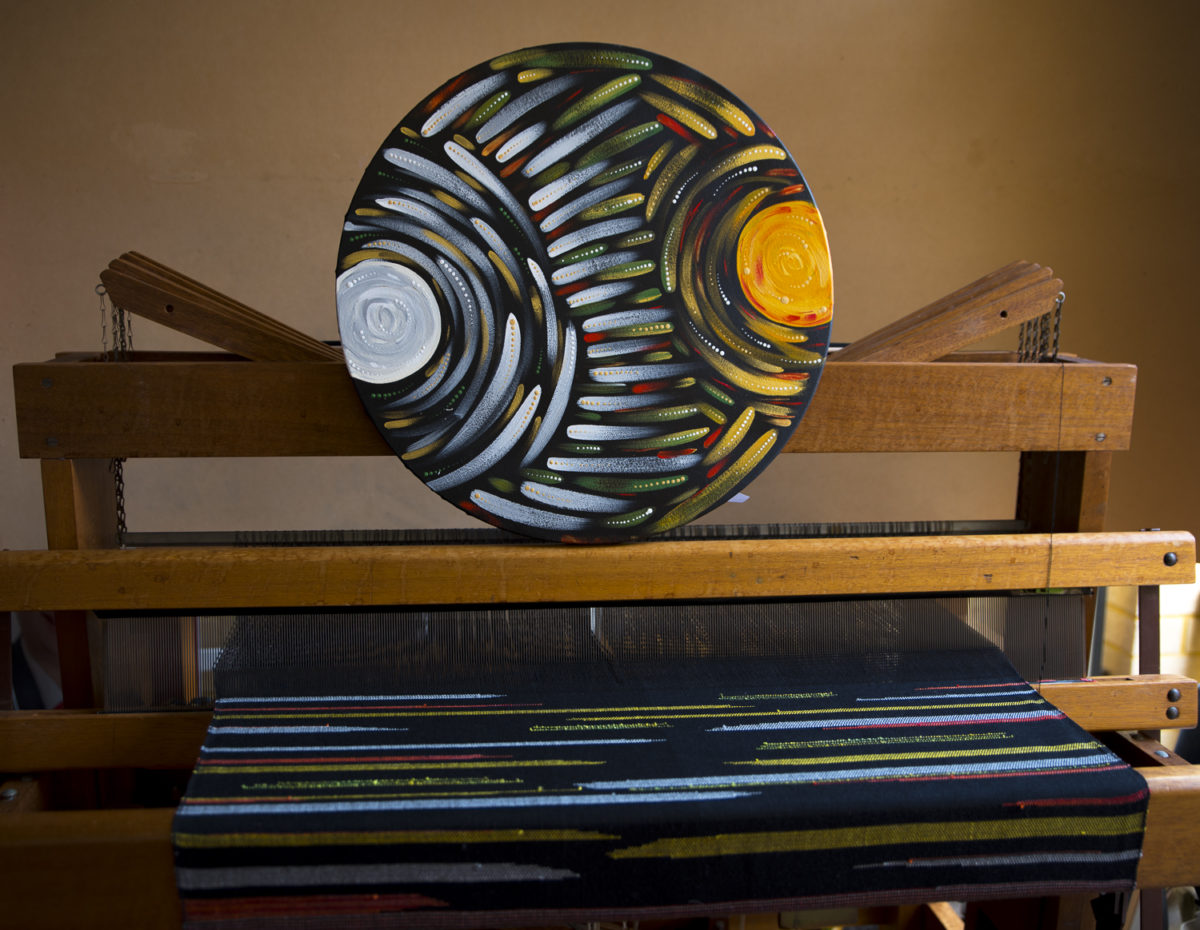 *Runner Up for ‘New Weavers Category’ for the Australia and New Zealand Weavers Competition 2018, themed ‘Look up’.

When I read the theme “Look up”, I immediately thought about how I was to honour African Art within the theme. Through Ubuntu Fibres, I weave in respect of African art. The latter is about story-telling: ancestral history, tales, about the gods, about the ancient lands, about the old ways. So, I asked myself “When my ancestors looked up, what did they look for?

The first thing that came to my mind was how for thousands of years, African peoples, like many of the First Nation peoples, have used their own set of knowledge about science and astronomy to practice culture and sustain themselves.

One example is the study of the moon cycles has influenced how they cultivate and harvest crops. Therefore, I decided to represent on textile a harvest practice that uses knowledge of the moon cycle. Since I was going on a concept rather than an existing inspiration photo, I approached the incredible Elizabeth Close – Aboriginal Artist – Pitjantjatjara, Yankunytjatjiara – to discuss a collaboration for the interpretation of my concept onto both canvas and fabric.

Elizabeth and I discussed about colour themes, and the mind-blowing similarities between African arts and Aboriginal arts. Elizabeth also shared with me how her ancestors used their knowledge of science and astronomy for thousands of years to sustain themselves too and in other aspects of their lives within their culture.

Therefore, the image you see in the picture, is a photo of the result of our collaboration that she put in acrylic on canvas, named ‘Tjukurpa’ (say: Chook-a-pa), “the Pitjantjatjara word for our dreaming, everything that is and ever will be. Our creation stories, our song lines that create the landscape, our stories and songs”, explained Elizabeth.

To achieve my objective of showcasing African art and African weaving style, I used a block coloured warp – a common weaving style within Africa. Black was easily my first choice, not only because it is an important colour in African art, but also to represent the darkness of the cosmos. To add multiple colours in African textile, different coloured threads are usually used as weft.

Clasped weft is a common technique on the continent; I logically build on my sun and moon and I represented the brush strokes showcased in ‘Tjukurpa’, using clasped weft of different coloured threads within our colour theme. The grey represents the moon, and the yellow represents the sun; the clasped grey represents moon rays and the clasped yellow represents sun rays. The hand dyed bouclés with yellows and greens used as supplementary threads (inlays) represent the crops, especially maize crops, produced following the moon cycle, with the help of the sun. The bouclés yarn gives texture, like I wanted for the crops.

I started the weaving process, aiming for a 5.2m wrap. I put on a 10m warp as I also wanted a ring sling for myself to keep, and some scraps. However, due to difficulties in the last month of my pregnancy, and the constraints postpartum brings, in addition to the time-consuming weaving techniques I was using and my novicehood, I started to run out of time, halfway through my sun and moon construction.

Therefore, I redesigned the competition piece to be suitable for a ring sling conversion. In the end, the designed has changed for another two times as the weaving guided me in a different direction. I believe the ancestors were guiding me. I had also attached a digitally printed copy of the canvas on the loom in front of me for reference as I weave. The tail end is bordered with the bouclés inlays, reminiscent of bordered finishes in many African fabrics.

To be completely honest, I humbly chose cotton and Tencel because I have researched that it was an interesting combo to give a good drape and some shine, and Tencel was the fanciest fibre that I could afford for this project. I had also never own a wrap other than pure cotton, so I thought it was a good opportunity to introduce a new-to-me fibre.

I wanted to respect African styles of weaving, so I knew my wefts would be predominantly different bold coloured threads that contrast each other. I found that some coloured yarn that are available in stores worked fine, but I also wanted to venture into hand-dyeing because I got inspired by fellow weavers.

Subsequently, I took on the generous offer from the wonderful weaver and dye artist Laura Bailey to go to her place for a dyeing lesson. I felt so honoured and lucky and learnt to dye my first yarn. It was the bouclés supplementary threads and they turned out exactly as I wanted. I then went on to dye some Tencel yarn yellow for my sun. It didn’t turn out exactly as I wanted as it lacked some depth, I thought.

So, I proceeded to over-dye on the loom as I weave. I also used some Egyptian cotton yarn that was gifted earlier to me from a fellow weaver Downunder as a welcoming present into the weavers community. It turned out that the yarn was previously hand-dyed by my friend and fellow weaver Louise from Muma Bear.

I find this interesting and special as my weaving name is Ubuntu Fibres, where Ubuntu means ‘humaneness’ and how all our existence depend on each other’s. And here, I have a first wrap that is made up of love from different people, that I used to create this unique piece.

I originally named the warp ‘Harvest’. I had even printed the tags for it before I wove my cloth! When weaving was finished, my heart told me it was more a ‘Lunar Harvest’ than anything. I hence changed the name. Lesson learnt: next time, do not print tags until the end of the wrap, especially since my fibre composition also changed due to redesigning of the piece!

The wrap was converted to ring sling by the one and only professional convertor seamstress – and fellow competition weaver – Elka from Indicat Designs.

It is a gathered-shoulder ring sling, and Elka perfectly sewed the ring sling such that the moon and sun opposition falls on the shoulder towards the back, just liked I imagined the ring sling. This way, the Moon and sun are seen when you “look up” to the back of the wearer. I’m was based in Perth and Elka in Brisbane and good’ole Australia Post gave me a fear of loss packages during the postage to and back! Fortunately, the package finally arrived safe and sound.

As mentioned above, time restraint was a challenge but at the same time a blessing because it pushed me to redesign the piece until it’s best version! My biggest real challenge was the lack of confidence I had in myself when I started the weaving process because of my novicehood, not only as a weaver but in the handwoven geekery community.

I doubted whether I deserved to be there, whether my art was relevant, whether my multifaceted difference would make me negatively the odd one; the idea made me feel insecure and uncomfortable during the 3 months of the competition weaving process. However, many fellow weavers, without being fully aware of my inner challenges, uplifted and supported me at every corner of the competition. I am humbled.

Regardless of the competition results, I feel that I have won. I have won my own battles of feeling I belong here as a weaver and my art deserves to be here. I am so proud of bringing my culture and history into the western weaving community. I feel like I have made my ancestors proud, so for me, this is a victory. And the many friends I have made along the way, and the great opportunity this competition has given me to engage in a community Downunder that I previously would feel intimidated by; an opportunity to showcase culture and build bridges, through the love of textile art.

Last but not least I have won a beautiful peace of art by one of my favorite artist ever, Elizabeth! Thank you, my darling friend, for inspiring me and encouraging me to feel confident in using my art to reclaim my identity and culture as a Bantu woman.

I dedicate this piece to my daughter, Malaika, who was in my belly when I started it, and who was wrapped on my chest when I completed it.