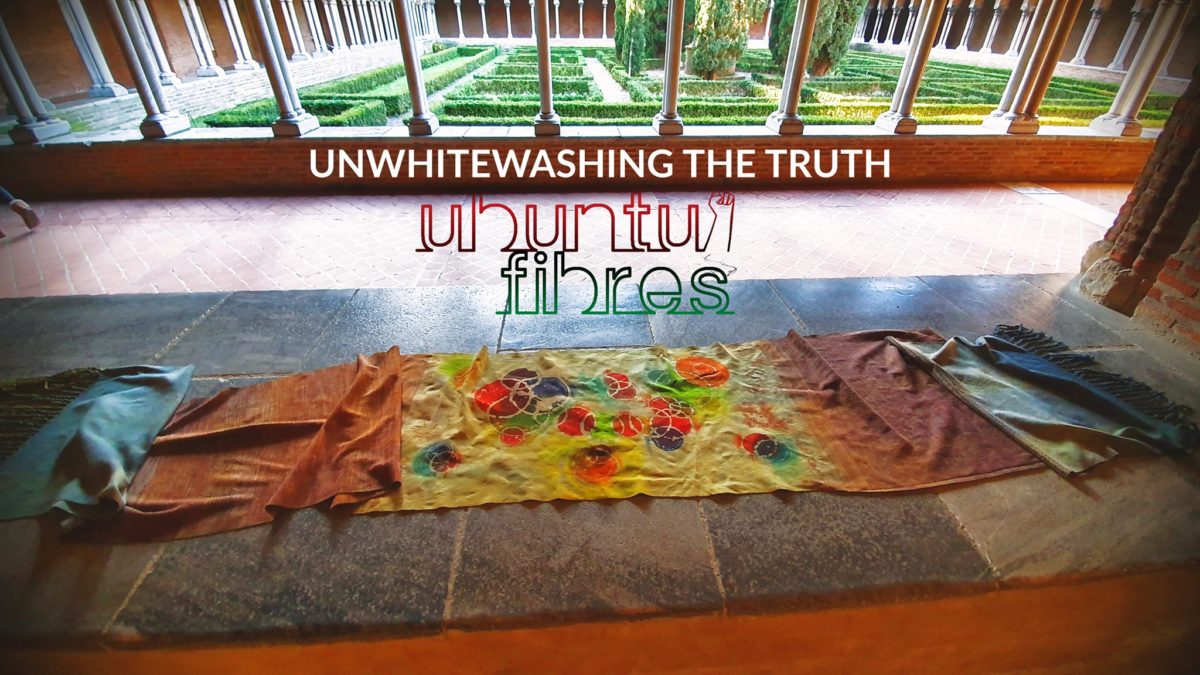 Winner of Shaft Category at the ‘Great Competition of Weavers 2019; Themed ‘Literature

‘Unwhitewashing the Truth’, by Ubuntu Fibres, is the ultimate combination of my passions for textile art, activism and academia. This piece represents the trinity of my being.

When I saw the theme literature, the only thing I thought of was academia. I was confident when I was given the sub-theme ‘non-fiction’, since the only books I read texts for academic purposes or social-political think-pieces and poems; I otherwise do not enjoy sitting down with a book. I knew from the start I wanted to talk about how whitewashing academia is in general.

I also wanted to showcase my favourite piece of literature, Kimberlé Crenshaw’s 1989 study, “Demarginalizing the Intersection of Race and Sex: A Black Feminist Critique of Antidiscrimination Doctrine, Feminist Theory and Antiracist Politics”. Crenshaw my ultimate role model, is an aspiring law academic; I am looking forward to being a published law researcher myself, in the field of criminal justice.

In addition, Crenshaw is an unapologetic Black woman whose work has not only serve to highlight the experience of Black American women within the justice system and other institutions, but also in drafting the first constitution of South Africa. Crenshaw’s work is widespread in the African diaspora as there are similarities in the experiences of Black women worldwide.

Coupled with this, intersectionality speaks to me as a dark-skinned Black Queer African immigrant woman, with other identities I choose not to disclose. I have seen repeatedly how being in the intersections deprives me of the benefit of the doubt, support and a sense of belonging, when stories are being told that involves me.

In fact, while weaving this piece, there were events, where as a dark skinned woman, I was pushed further to the margins; I was made to feel different in my feelings regarding a situation, alone and even questioned my own sanity and perception of reality; there were whitewashed versions of said events being spread, with the white and white presenting people who dominated the narratives, were making the most of having the benefit of the doubts thanks to their whiteness, and taking measures to silence my Black self further.

Meanwhile, I could witness some people listening to the whitewashed ‘truth’, unable to take into consideration not only how the layers of privilege possessed by these narrators influenced their perspectives, but also how the intersectionality of my identity all would have affected my relationships and interactions with said dominating narrators. Yet, this experience has act as a catalyst for me to finish this tedious project, all while having a mental break down, and other physical conditions. I was determined for my story to be told, just like the academic I was born into, just like the Black woman I was born as.

I was set to weave a twill draft for a change. However, my anxiety was out of control, and I decided to stick to plainweave and focus on perfecting my weaving techniques (my selvedges, learning to repair mistakes while on the loom, and weaving the longest piece so far!) I limited myself to trying two new-to-me techniques so that I could allow myself adequate energy and attention to execute my plan as well as I can.

For warp, I choose to use 100% Venne organic cotton yarn that I bought for the last Great Competition of Weavers, that I did not have time to weave. This yarn was two commercially-dyed cones of 2 different colours (sky blue and lime green). The weft was 100% viscose rose I choose because I had enough of it left already for a long piece and it takes dye very well.

I tried warp dyeing for the first time. I overdye the Venne, in chains with gold and black dyes. The black didn’t work out and acted as a dark blue instead, leaving me with a warp of various shades of green. Despite the unplanned result, I was satisfied; it illustrated how, given the intersections, too often in society, I don’t get exactly the outcome I planned because some things are out of my control.

For the brown wefts, I dyed in skein. Ironically, about a meter of the rose viscose came from a racist white weaver who has ended up whitewashing the aforementioned events; I overdyed these yarn to dark brown to represent unambiguous PoC taking over the narratives.
For the middle section, I used traditional African Batik dye technique to illustrate the intersections of identities.

‘Unwhitewashing the Truth’ came to me during a moment when I was asking my ancestors to help me get through these trying times for me, write before I take the woven wrap off the loom.

My health took a decline in the last month, due to me running out of my medication. I moved from Australia to France’ I brought with me 5 months’ worth of prescribed medicines. Due to some restraints, I haven’t yet found my specialists in my area, let alone a new General Physician. So, I have been battling my mind and body while I weave the longest piece I dared to weave, coupled with the events involving white aggression mentioned-above; it has been the hardest weaving project so far, with the physical impact on my body, but it was worth it.

‘Unwhitewashing the Truth’ is my 4th wrap warp, and it took a month to make, from measuring the warp to finishing the fringes. I wanted ‘Unwhitewashing the Truth’, to be a literature piece in its own right. The tails acting as the ‘publication’ cover (imagine the dreadlocks for the author, and a visual demonstration of unwhitewashing process with the dipped dyed tails) I also wrote my submission blurb like a short piece of academic literature so people get to know more about who I am, and my academic vocation. Photos were shot all using a phone camera, my uncle’s! I was modelling the piece, wearing my professional work clothes. The shoot was held at Les Jacobins Monastery, which provides the perfect architecture in Toulouse to represent criminal justice and academic literatures.

To all dark-skinned women or femmes in the world.